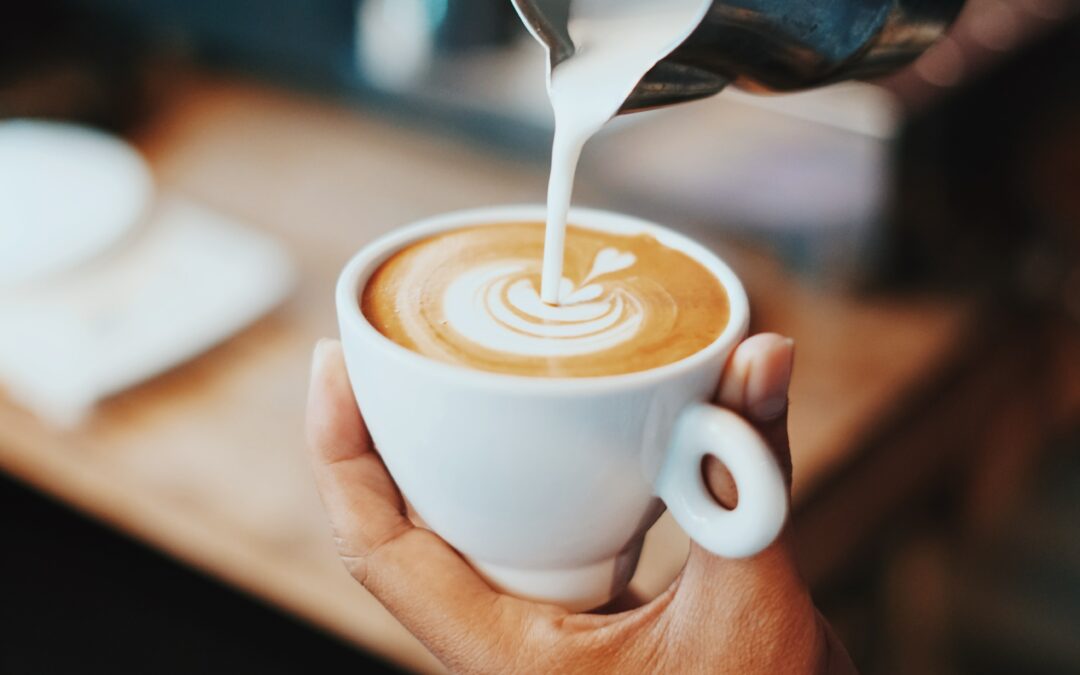 In our stunning town of Knoxville, Tennessee, we are blessed with our pick of many cozy coffee shops. What pairs best with our favorite Scruffy City shops? Leaves changing and temperatures dropping. ENTER: Sipping on cozy seasonal fall coffee creations around town. (Eek!😍) We all know pumpkin lattes are here to stay (and we are, for the record, all about it), but there’s more to fall than orange gourds. We took a trip around town to find y’all some of the GOODS. Move over, Starbucks PSL. There’s some new fall goodness in town. Without further ado: Here are five of the best fall lattes in Knoxville.

We’re starting off strong with Awaken Coffee downtown – specialty lattes are kind of their thing. The Downtown Spice is Awaken’s take of a classic pumpkin spice – but wait! They add a toasted marshmallow syrup🤤 Sipping on this drink makes you want to grab your coziest flannel and stroll down the streets of the Old City, or even kick up your feet inside the shop and stay while. Pro-Tip: Ask for marshmallows on top…. and make it toasted! 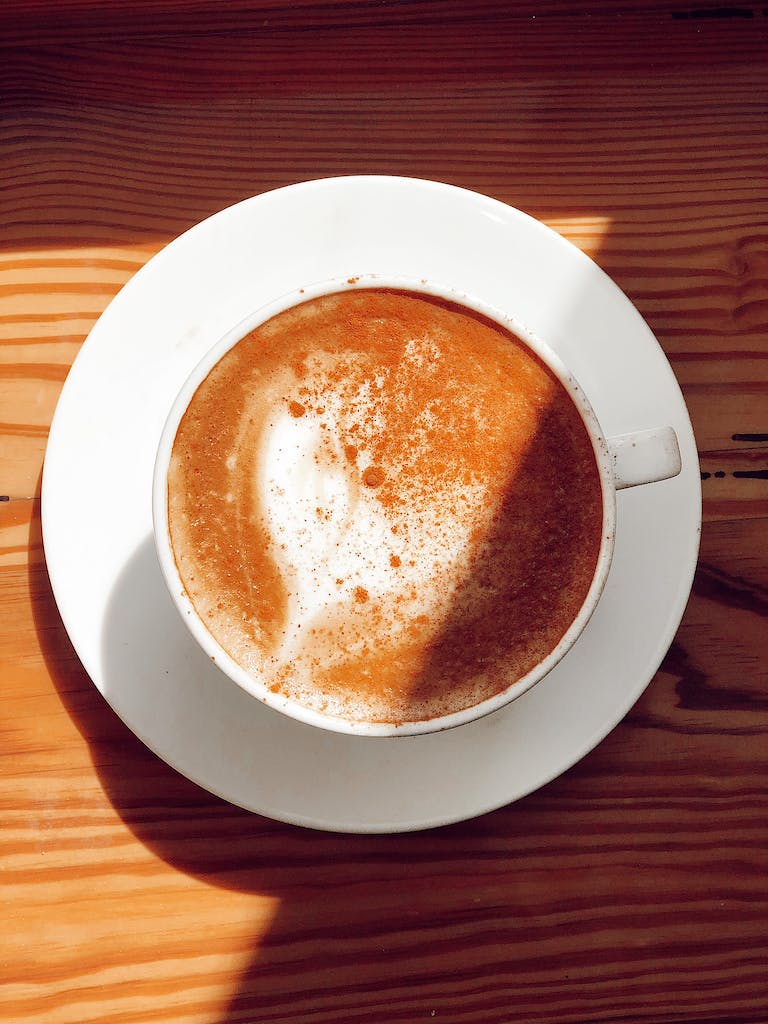 Cinnamon, marshmallow and white mocha syrup swirled in with espresso and steamed milk. Now you can have your cinnamon roll AND coffee, and drink it too. Tastes like a Sunday morning if ya ask us. Pro-Tip: This one is even more delicious iced – looking at you year-round iced coffee drinkers! 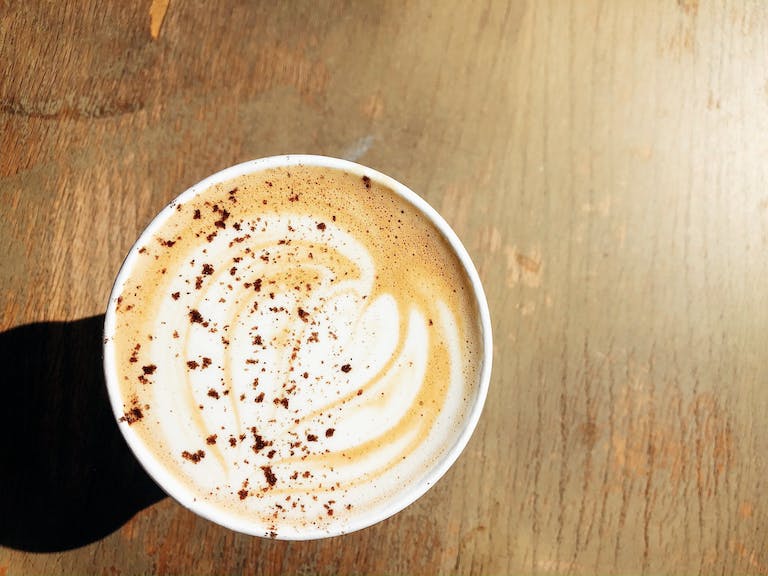 This latte tastes like fall with its subtle hints of apple and made with creamy oatmilk. Add in the fact that you can sip it inside the endlessly adorable Likewise Coffee? It doesn’t get better. Pro-Tip: Ask for it to be made with caramel, which basically makes it a caramel apple latte. Honestly, what more could you even ask for?😍

Who says you have to wait until Thanksgiving to satisfy your pecan pie craving? The Pecan Pie Latte is subtly sweet and not-so-basic. But who’s surprised? Treetop always crushes it with their out-of-the-box house-made syrups 🙌 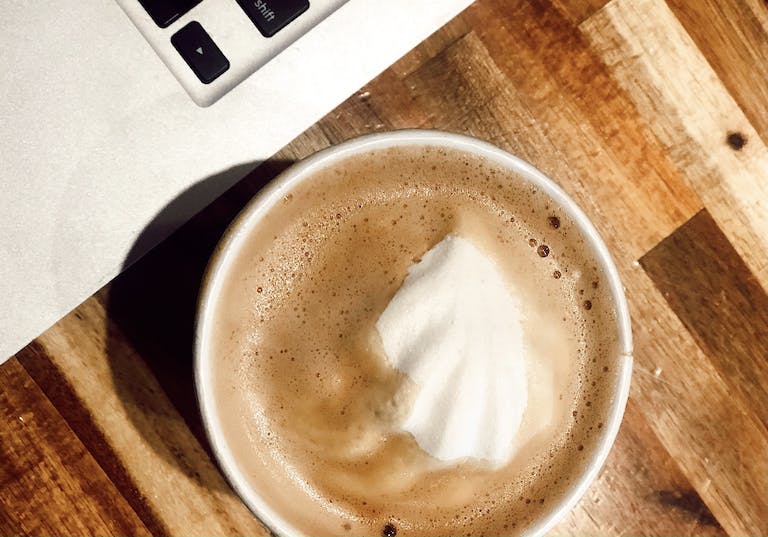 Marshmallow syrup, mocha, topped with whipped cream, a baked meringue, and chocolate shavings. Close your eyes and you may forget you’re at K Brew and not actually at a bonfire, especially when the merengue melts into a marshmallowy goodness.

It’s not technically coffee but the K Brew Harvest Apple Cider is YUM. I mean, look: 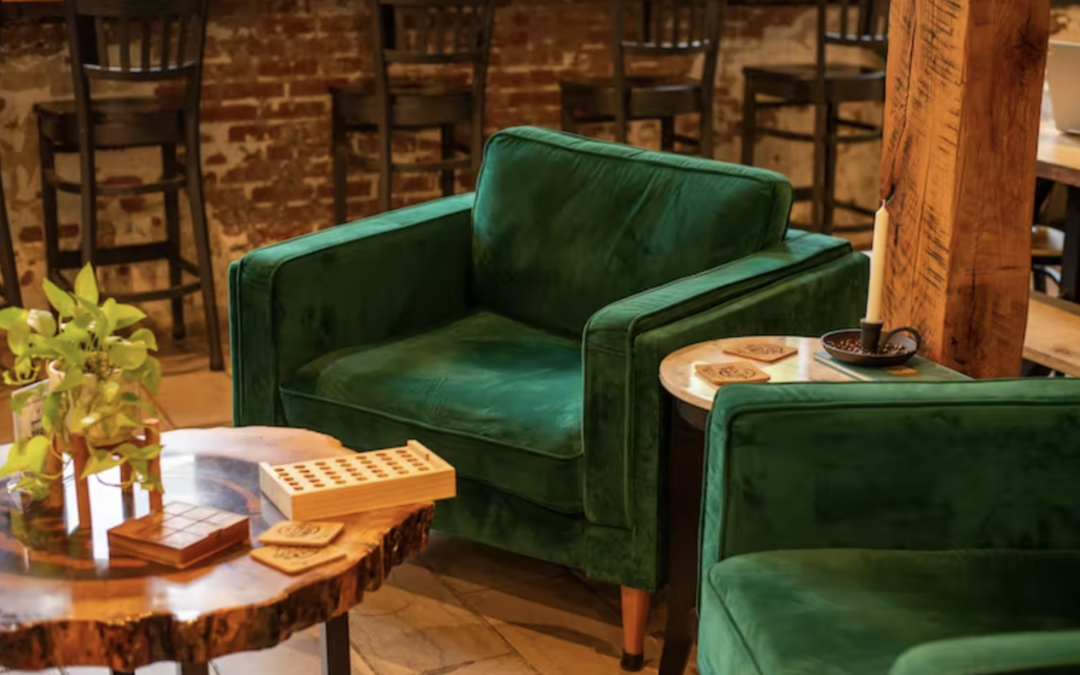 Likewise Coffee is chock full of cozy nooks. Heck, it’s in a gorgeously renovated old house so the whole thing is basically a cozy nook. If you walk in and land the green armchair corner or the big leather chairs in front of the fireplace, just trust us – you’ve won the freakin’ lottery. 10/10 recommend this place for all cozy days. Golden Roast Coffee Roasters on Sutherland Ave (otherwise known as the Marble City neighborhood) is located in a renovated old church (okay, maybe we just like old renovated buildings…😂) and we are here for those vibes. Between sinking into the velvet green armchairs or snuggling into the big leather couch, this is clearly the place to ready any storm.

Vienna Coffee Roasters is generally bright, open, and airy – but tucked in the corner is a fireplace. When the weather gets cool enough, they fire that baby up which means you can cozy up with a book (located, you guessed it, by the fireplace!) in one of the surrounding chairs or go full-homey and sit right on the warm hearth.

Located just down the street from Golden Roast, Backroads Market is another cozy gem in Marble City. Their space doubles as a perfectly curated home goods store so you know they have the good furniture. Between all the comfy couches, cozy corners, and inspirational wall decor, it’s almost startling how easy it is to spend an entire day hiding out there.

Irregular pink marble floors, original exposed beams, the vestiges of the old church kitchen—these are just some of the charming architectural features welcoming customers at The Golden Roast Marble City. This newest space, counterpart to the “fast-and-furious” location on Melrose established in 1994, opened in January of 2020. What is evident in speaking with Don Payne, owner of this Knoxville franchise, is not only his commitment to the best coffee, what he calls “farm to cup,” but also his support for community—“locals supporting locals.”

If the brief mention of 2020 just made your skin crawl, here’s a cozy memory to offset: Don had his first cup of coffee at six years old, and he remembers it vividly, sipping it with cream and sugar. “One of my oldest brothers gave it to me, and I thought it was the best thing ever.”

While coffee began as Don’s hobby, it transformed into a passion for its chemistry—Don says his heart is in the roasting process, and shortly after the original Golden Roast opened, they began roasting their own beans on a Royal No. 4 machine from 1914, displayed at the front of the shop. Nostalgia is everywhere, and Don pays tribute to history: local, national, and global. “I get to read about the families, the farm, how much they’re producing, what went on this past year for their family and how their farms got affected,” Don says, and he is incredibly thoughtful about the geographical journey the beans take to get into your morning latte. Seeing Don’s excitement about a cross-country motorcycle ride he’s planning for the summer highlights just how much he cares about people and places. 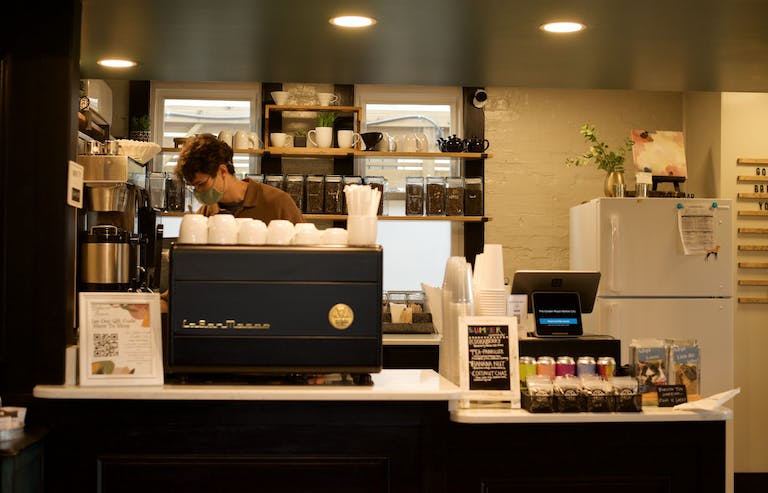 Even before opening the Marble City coffee shop, Don and his team participated in the Knoxville Open Streets event where they handed out free coffee and engaged with the neighborhood to get a sense of their needs. And when asked about what he wanted the Sutherland site to be he admitted at the time, “I can’t answer that. It’s all going to be dependent on the people here in the community and the customers, and from there, it’s going to get its DNA.”

What was once Marble City Methodist’s congregation hall is now a space lined with exposed brick, indie music, live edge tables, and textured couches. Throughout the shop, you’ll find wares from local artisans such as Knox Girl Soap, Knox Paper Scissors, Janine Does Pottery, and Cass Collective, so you can shop Knoxville businesses as you enjoy Don’s favorite coffee, the Nitro, made of Mexican Chiapas beans.

Outside, is an impressive wooden deck with string lights, and Don plans on live music, patio poetry, and food trucks on the weekends throughout the summer. The general manager, Taylor (we absolutely adore her and she may or may not be a writer for New2Knox as well – okay, she is. Check out one of her pieces here.), is responsible for seasonal drinks and a unique signature menu. Right now, they are featuring the Banana Nut Latte, Tea-Painkiller, Kookaberry, and the Coconut Chai Latte. *drool* 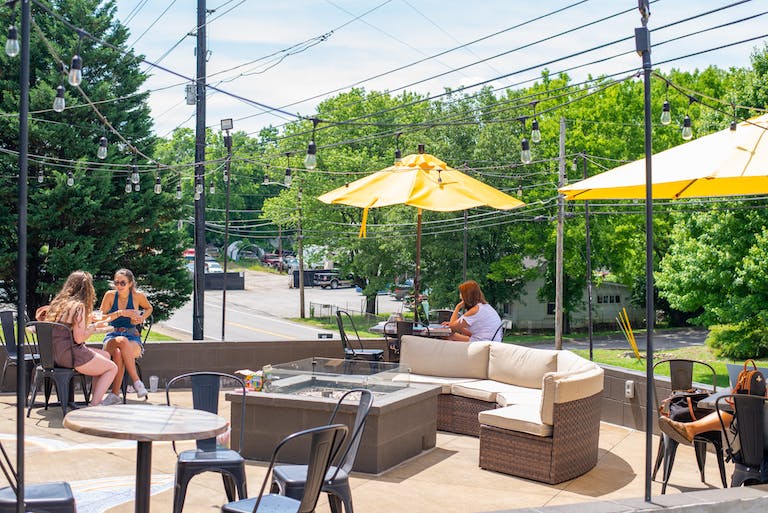 After the unprecedented year we have had, Don invites us all to Golden Roast Coffee to relax, to stay awhile, to “come in and just breathe.” With the local love, vibrant patio, and caffeine for days, we plan to do just that.
See you at Golden Roast, Knoxville!

Likewise Coffee: A Look Inside

The doors are open to a special new coffeeshop on Magnolia Ave: Likewise Coffee. Only a mile or so from the downtown area, the owners Katie and Will Boggs hope to make this charming new spot a hub for community in East Knoxville. With an incredible mission, unique space, and coffee roasted on-site, Likewise Coffee has quickly become a new favorite spot for our caffeination (because let’s be real – we’re caffeinated more often than not), not to mention, some of the best coffee in Knoxville.

While good vibes and delicious brews are more than enough to keep us coming back, Likewise goes above and beyond. Are you wondering where the name “Likewise” comes from? Maybe it sounds familiar – it’s from the Bible story about the Good Samaritan. In the story, Jesus shares how love looks like selflessly connecting with and helping neighbors in need. ¨Go and do likewise” is the message to His followers. So true to their name, all (yes, all) of Likewise Coffee’s profits will go towards the non-profit “Raising a Voice.” Started in 2015 by the Boggs themselves, Raising a Voice works towards ending human trafficking in our area and around the globe by offering various forms of support and advocacy. So as you purchase your yummy vanilla latte or a warm herbal tea, you will also be supporting Raising a Voice´s amazing mission! (Does this make you a local hero? We think yes.) 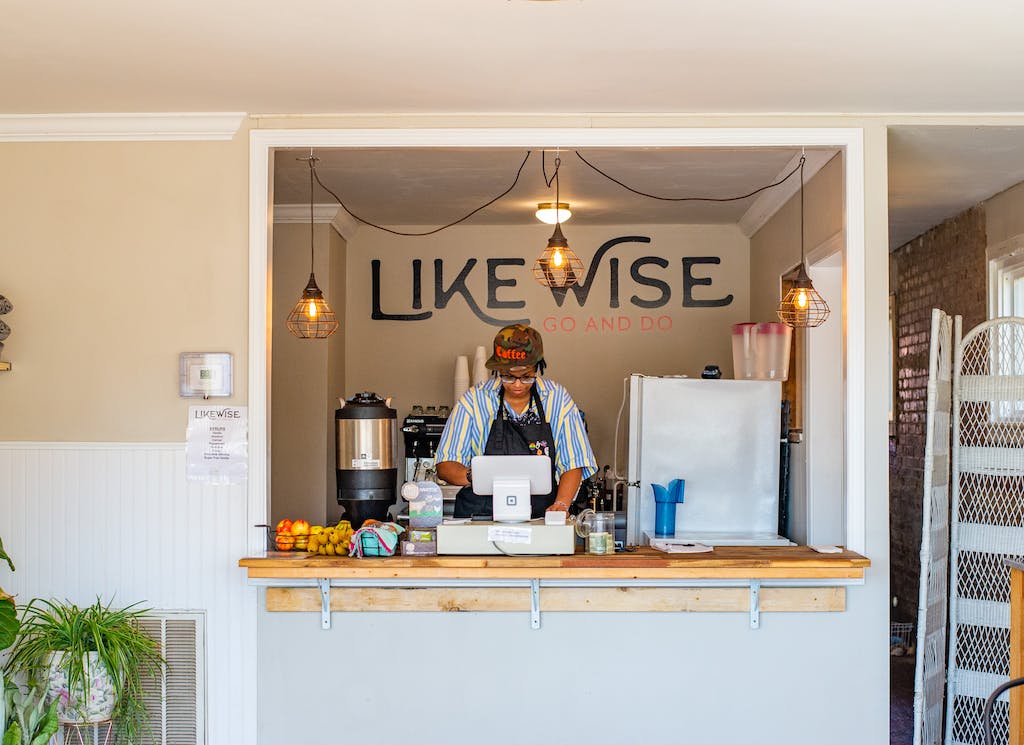 If your heart’s not already full of warm fuzzies, wait until you hear about their location. Likewise is located on Magnolia Ave about a mile east of downtown in a large renovated historic home that is over 100 years old. (In its long history, the house has been things like a restaurant and law office – to transform it into its current state, Katie and Will received the Facade Grant from the city of Knoxville.) As you walk in, you’ll find the original stained glass double doors of the old home as well as beautiful original hardwood floors. The space has numerous rooms and nooks (our dream) where you can settle in with big beautiful windows and plenty of natural light. There is modern and cozy furniture throughout, a fireplace, and an inspiring mural of community in Knoxville from a local artist, Pam Simpson.

Outside you will find what we think is one of the best outdoor hangout spots in Knoxville! There are picnic tables, another colorful mural by local artist Michelle Cosse, and a large space which can host food trucks and events in the future. The coffee is roasted on site in one of the many rooms. (How cool is that?? Fingers crossed they give tours of how coffee roasting works one day!) They are offering a traditional coffee and tea menu along with seasonal drinks and pastries, including scrumptious breakfast biscuits. (We die for their breakfast sandwich on a biscuit.)

So, there you have it, Knoxville friends! Yummy seasonal lattes and breakfast sandwiches are waiting for you right down the street, along with a charming space where you can catch up with a friend or get some work done, all while basically changing the world. We plan on cozying up there a bunch this season and we highly recommend you go and do… Likewise 😉