7 Most Haunted Spots in Knoxville 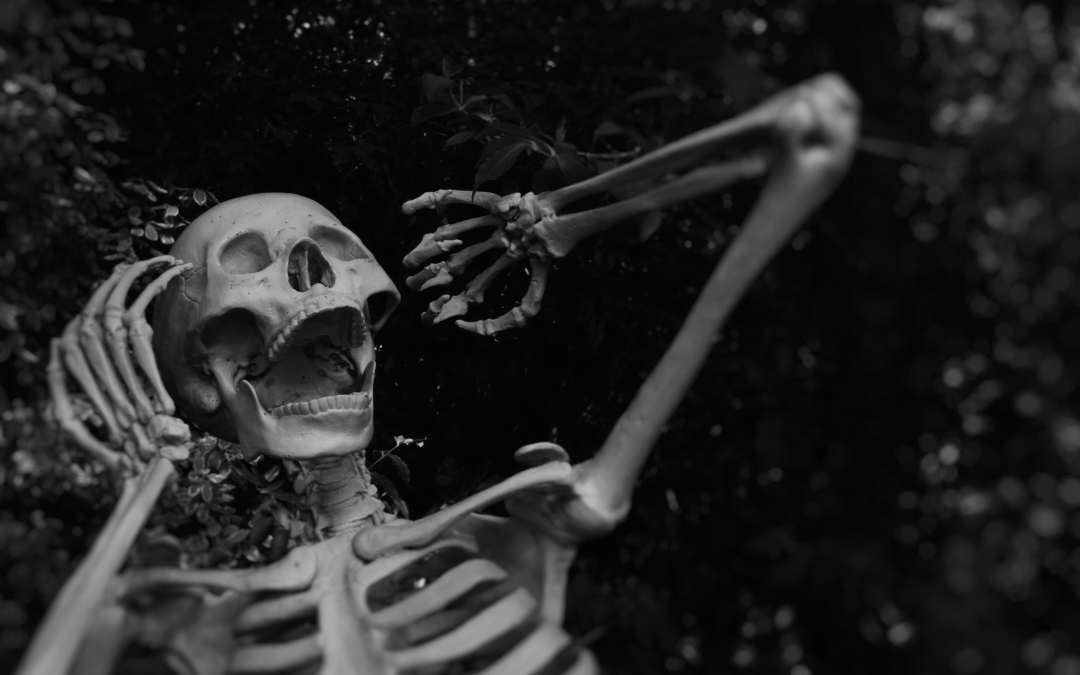 Have you ever been walking through the Old City and felt a chill… on an 80 degree night? What about attending a concert at the Bijou, when a stall slams in an otherwise empty bathroom? Knoxville was once a place riddled with battles, riots, and subsequent deaths. Some of those who walked our streets in times passed seem to have unfinished business… and they are said to haunt Knoxville to this day. (oooOOOOooo!) That’s right – Knoxville’s haunted.

We sat down with author, history bluff, and founder of Knoxville Walking Tours, Laura Still, to hear about the top haunted places in Knoxville, get thoroughly spooked out, and in turn let you know all about these haunted spaces so you too can get spooked at your leisure.

Right near the Gay Street Bridge, this site was the location of multiple hangings and hundreds of murder trials. In fact, the entire block was full of criminal activity and conviction. Nowadays, people don’t like to work at the City County building after dark due to the haunted activity. They’ve seen shadows on the way to their cars, heard doors slamming after everyone else has gone home, and heard footsteps when no one was there. While this does seem like an efficient way to maintain a work/life balance – we prefer not being kicked out of our office by actual ghosts 😬 We’re just getting started, pals. Keep reading to learn about the most haunted spot in Knoxville! Back in the day, the Old City was known as the saloon district. Laura says, “If every person who died there had a ghost, they wouldn’t need air conditioning; it would be cold all the time.” Um, OKAY. Back then there were dive bars, brothels, and a lot of poverty. Attendees on Laura’s tours often experience dodging shadows and the feeling of being watched/followed – but to top that, people have seen the ghost of a little girl in a white dress crying. Laura suspects that this ghost is related to the 1919 race riot. Spooky for SURE.

There used to be a bar down on Jackson Ave. owned by a woman named Nettie. One night, her good friend Jack McPherson came in, already very drunk. Nettie denied him another drink (understandably) and he became enraged. Jack ended up being hanged – but rumor has it he still roams Jackson Ave. looking for Nettie so he can apologize to her. If you’re ever grabbing a drink at Pour or Post-Modern Spirits, be aware of any ghostly-sightings or feelings. It’s probably Jack! At least he’s sorry? 🙃 We had to include at least one cemetery on a list of haunted places! What can we say? We’re purists 😉
Laura’s self-proclaimed favorite ghost (she even dedicated her book to him) haunts the Old Grey Cemetery: Abner Baker. Abner was lynched by Union soldiers, and was eventually hanged on a tree by the river in 1865. The area around the tree was so haunted, sixty years later when it fell, people were so sure it was haunted that no one would even salvage the wood. These days Abner haunts his gravesite – if you sit quietly near his grave on a full moon, he shows up after the clock strikes midnight. You can count us out for that! 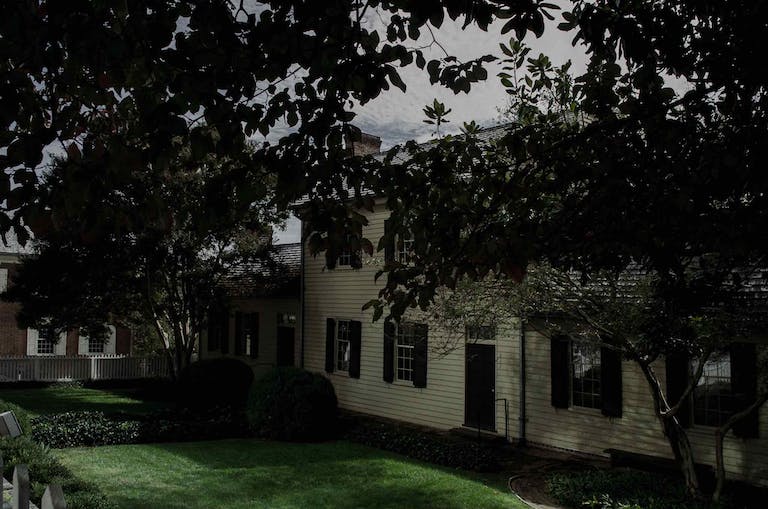 William Blount (Blount County’s namesake) lived in this mansion until his death in 1792… UNLESS HE STILL LIVES THERE? Tour go-ers have seen William staring out the mansion’s windows and some have even taken pictures of his silhouette. Boo-yah, that’s creepy. (Get it? Boo-yah? Like Boo, theres a ghost? Okay, moving on…)

This historic home has several stories. A particularly ghastly one happened in 1818 when one of their servants fell into the fire and burned to death. As a house servant, her duties included opening doors and windows to keep the air fresh. Current employees say she still likes to do that today. Often they’ll lock up the house for their lunch break or close up at the end of the night – only to return to open doors and raised windows. It must be pretty chilling (literally 😉) 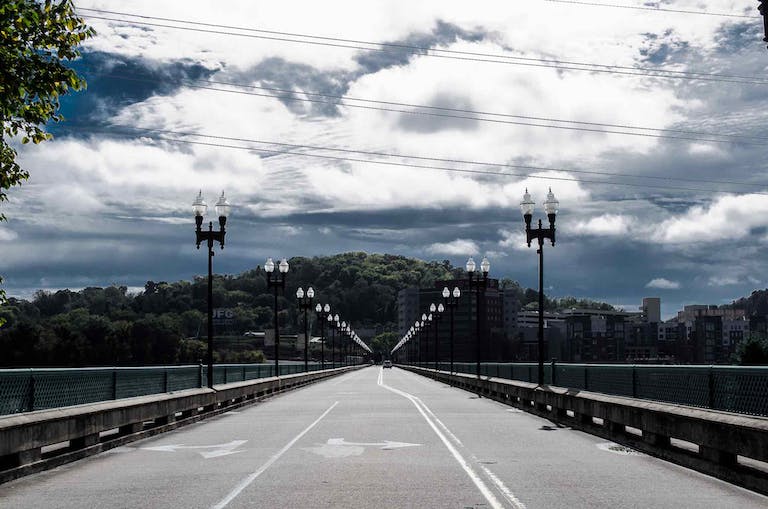 The illuminated glory of the Gay Street Bridge has some haunting history as well. In 1815, a man was running from a lynch mob and ended up falling off the bridge. Today he plays with the electricity on the bridge. For over one hundred years, the third light on the bridge has continually gone out, no matter what the city does to prevent it. In the early 2000s, the city of Knoxville went so far as to completely re-wire the electrical system, but this ghost won’t be stopped. The third light still flickers and goes out to this day. When Laura is leading tours and mentions how the third light doesn’t flicker “as much anymore,” it often starts to flicker right then, as if he’s saying “Hey look, I can still make the light go out if I want to.” We get it, man. Everybody deserves some rest from their ghostly duties – especially after a hundred years. Flicker when you want to and not a moment more. 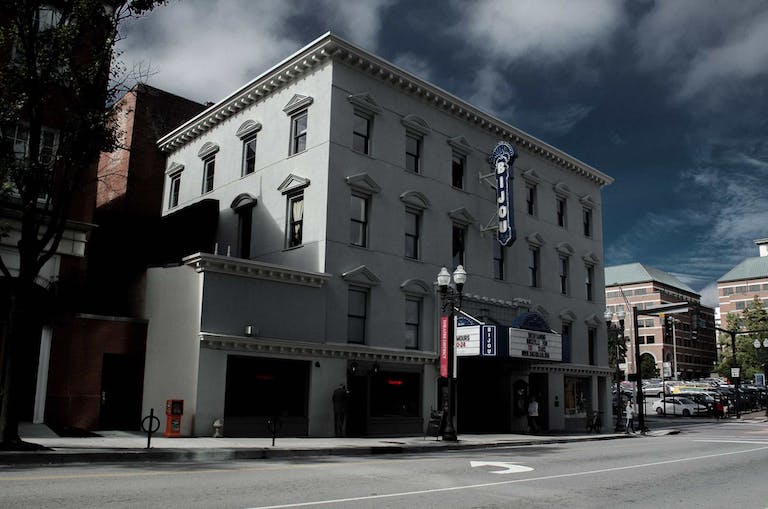 THE MOST HAUNTED PLACE IN KNOXVILLE

There are not one, but two known ghosts haunting this landmark! Before it was a theatre, the Bijou was a hotel during the Civil War. General William Pitt Sanders died there in the Bridal Suite… but people today still hear his footsteps, feel things touch them, and hear unexplained noises. Later, the Bijou had a well-known theatre director named “Smiley” who has now died. Several members of the public today have seen his ghost as well. Let’s just hope (for everyone’s sake) he’s as smiley in the after-life as he was before!