What’s that? You’d like an awesome update from New2Knox featuring special offers for food, drinks and ping pong? If you’re lucky, you might even get a birthday treat too…

Knoxville: Before & After
Written by: Jess Curtis

If you ask us, Knoxville is basically Taylor Swift. She’s reinvented herself a hundred times over, there are always new Easter eggs to uncover, every version rules, and she puts out some really great music. See? It checks out 😉 We’re here to look through some of Knoxville’s various versions and share more about the “then and now” of Downtown Knoxville.

Heads Up: this article is best paired with an iced latte from Coffee & Chocolate and the New2Knox window display at 323 Union Ave.
Also: Massive thanks to Paul from Knoxville History Project for all of his help in researching this article!

Surprise! Did you have any idea this was Market Square?? The now iconic block is almost unrecognizable in this photo from the 1950s, so we’ll help set the scene. The photographer would have been standing on Union Ave (if you’re looking at the New2Knox window display, that’s the street you’re on!) near the current Oliver Hotel, looking towards the square. Instead of the stage and fountains/splash pads of today, you can see the Market House on the right side of the photo. This was a tall thin building that ran right through the middle of Market Square. Despite the cars pictured, this still wouldn’t have been a through street. Instead, vendors would be parked and selling things in the back. Honestly, not too different from the Farmer’s Market we know and love today! 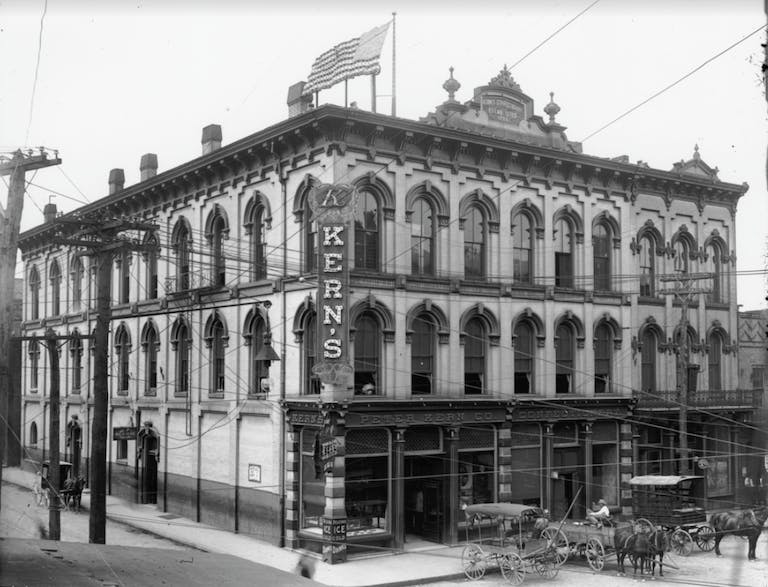 The Kern’s Building Then

The Kern’s Building was built in 1876, named after a German immigrant named Peter Kern.

Kern got stranded in Knoxville during the Civil War. He was put house arrest as a prisoner of war and spent his time selling molasses hoecakes to the troops. Ultimately, he chose to stay in Knoxville after he was released and opened up a soda fountain, ice cream parlor, and bakery. (He even became mayor for a year in 1890!)

The soda fountain was on the ground floor of the Kern Building, the ice cream parlor on the second floor, and the bakery was in the back of the building until 1930 when it moved across the river to Chapman Highway. Though Peter Kern passed away in 1907, he’s still got his mark in Knoxville. His portrait is prominently displayed inside Knoxville’s favorite speakeasy (the Peter Kern Library) and while there’s no longer a soda fountain in his building, you can enjoy brunch at Tupelo Honey which is almost as good 😉 The Kern’s Building is also now home to the Oliver Hotel. (Fun Fact: Elizabeth Gilbert finished the manuscript to Eat Pray Love in the Oliver Hotel’s predecessor, the St. Oliver Hotel!) 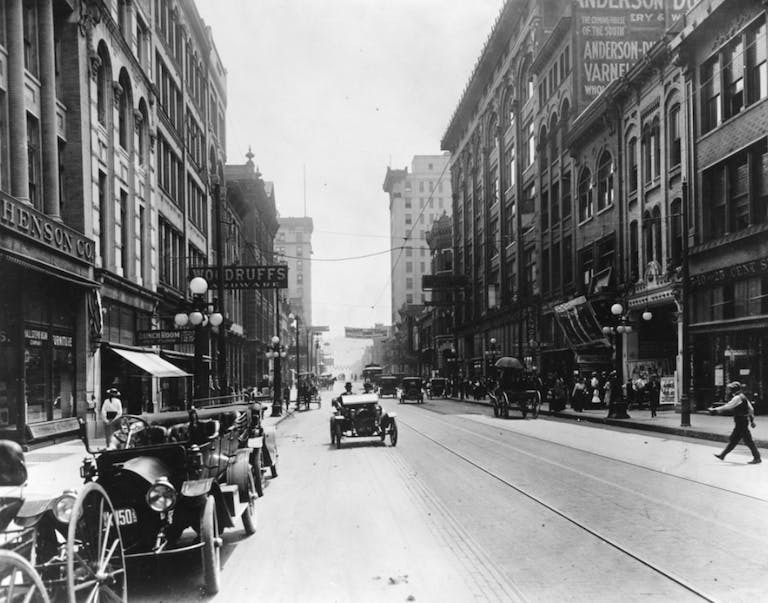 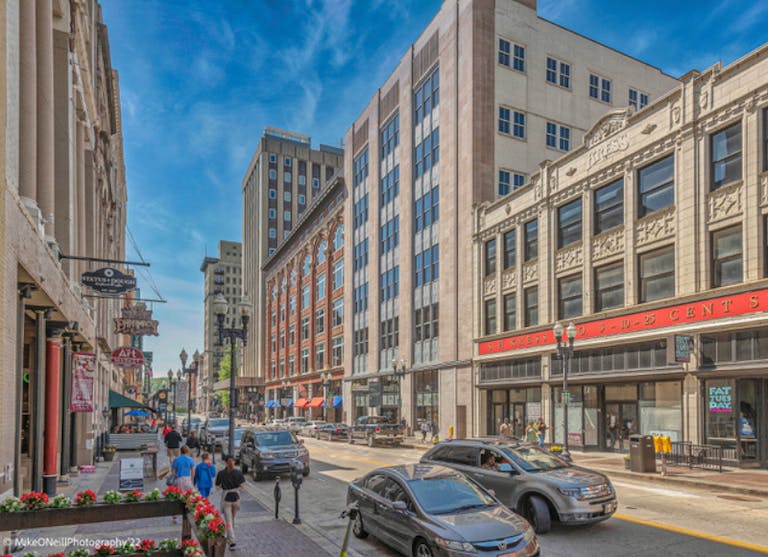 This photo of the 400 Block of Gay St. (looking south toward the Tennessee River) was taken in 1920. While the Tennessee Theatre wasn’t constructed yet here, you can see the Burwell Building (built in 1908) where she would one day call home. Across the street from the Burwell Building is the Holston Building – lowkey missing her two top floors! (Those came later, don’t worry 😂)

A lot was changing in the early 1920s in Knoxville. In this one shot of Gay St, you can see early cars, street cars, AND horse and buggies. 1920s Knoxvillians really did get to choose their own adventure 😂

Now look for the “Bankers Trust Company” sign on the Mechanics Bank Building in the bottom corner of the photo. In 1882, a family feud escalated into a a three way shooting right in front of this building. All three participants died. This story even appeared in Mark Twain’s book Life on the Mississippi. (You can learn more about the story in this book by Jack Neely.)

Beside the Tennessee Theatre, you can see the oh-so-elegant Farragut Hotel. She was only about ten years old in this photo, but the SEC would form there just a few years later in 1932. Not only that, the Farragut Hotel also hosted many meetings about the creation of the Great Smoky Mountain National Park. These days, she’s home to the Hyatt Place and their classy rooftop bar.

Now move your focus to the other side of the street and locate the Holston building. Two more floors were built on after this photo was taken. You can see those extra floors in the photo from the 1950s and they’re still there today!

Speaking of that 1950s photo (with the orange Tennessee Theatre sign), do you notice anything missing? Krutch Park, home of Downtown Knoxville’s Christmas tree didn’t enter the scene until 2005.

As far as the “Scruffy City” nickname, Knoxville was referred to as a “scruffy little city,” in 1980 by the Wall Street Journal when news got out that they’d be hosting the World’s Fair. Knoxville’s worn that phrase like a badge of honor ever since 😉

After a few years of being closed, the Sunsphere is open again to the public. Now you can enjoy the new and improved observation deck for just $5/person or just enjoy the view from various parking garage for free 🙌 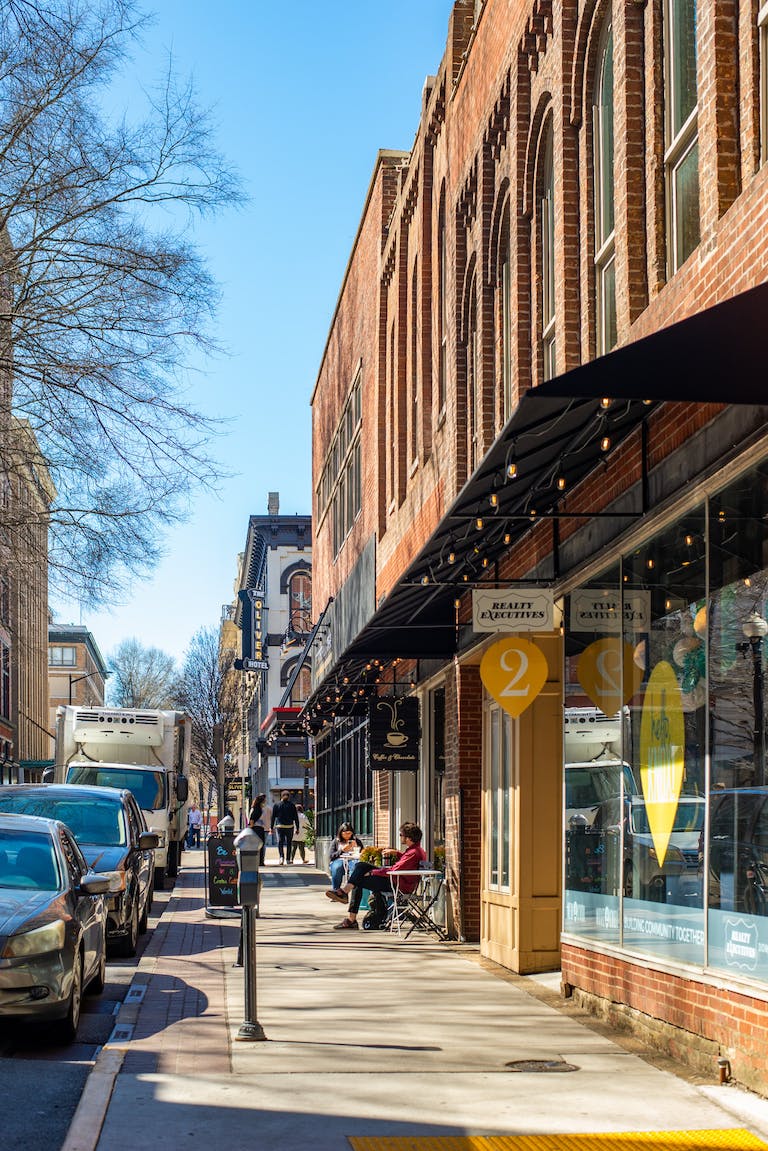 Last but not least – there was no way could we write a whole “Then & Now” article without talking about our beloved office! As much as we love our lil office today, we’re not gonna lie – Knoxville’s missing out on a rad eatery that used to call this building home.

While the building could date as far back as the 1880s, we really fixated on The Biltmore Cafe. They opened in 1933 and served “red hots” (ie. hot dogs) and tamales of all things. Believe it or not, Knoxville actually has a long, rich history with tamales. Harry Royston is credited with popularizing tamales Knoxville as early as the 1880s – well before the rest of the country caught onto the good stuff.

They also served beer. During the Prohibition, Knoxville closed 106 saloons 🤯 – astonishing to consider today. You can see a couple of the women in this photo holding pints – showing they’re finally reopening with beer by the glass 🙌

Cheers to exploring our lil city, both then and now! 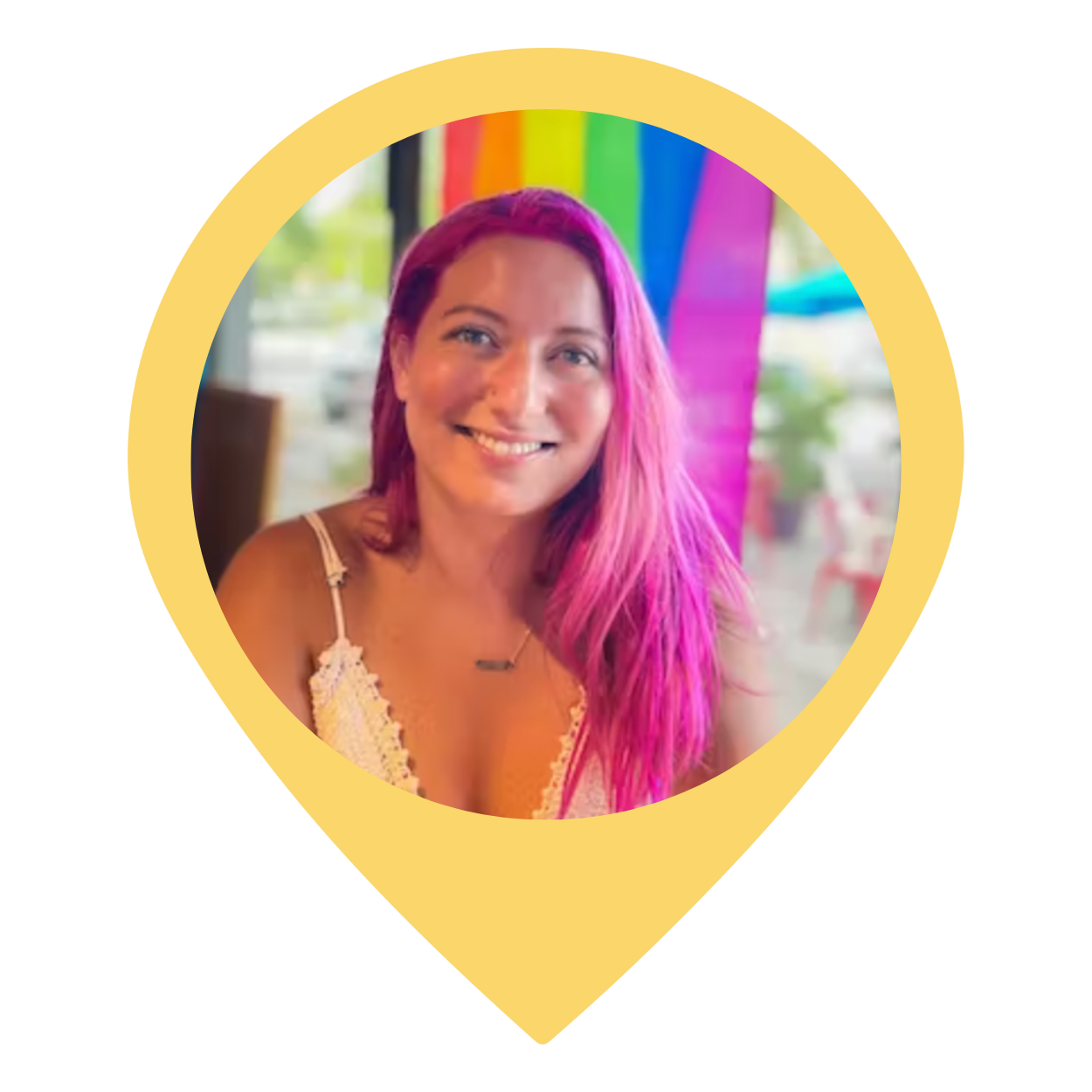 Rachie has lived all throughout the East and recently landed in...

END_OF_DOCUMENT_TOKEN_TO_BE_REPLACED 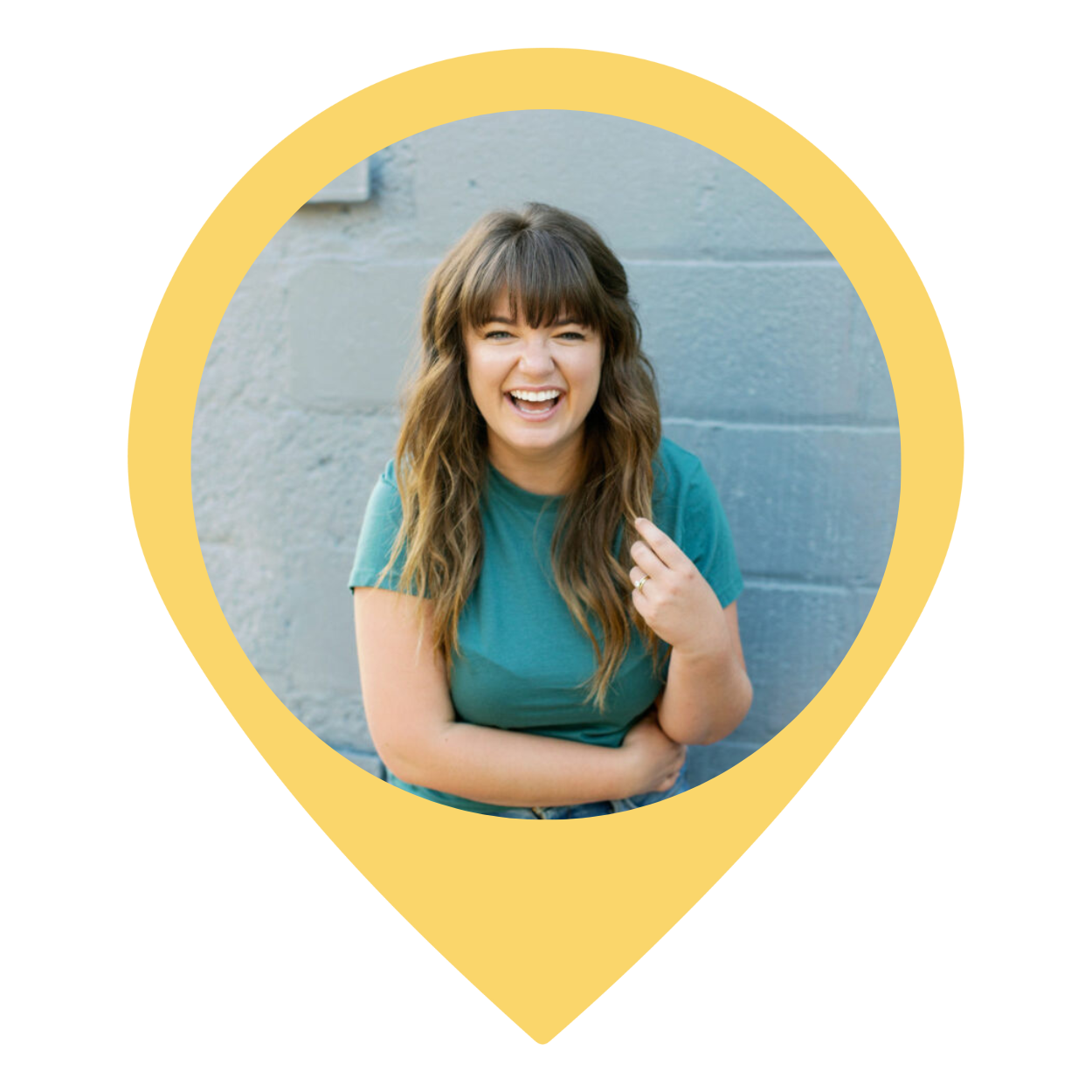 You can learn all about Emilie Stooksbury right here but here’s one...

END_OF_DOCUMENT_TOKEN_TO_BE_REPLACED 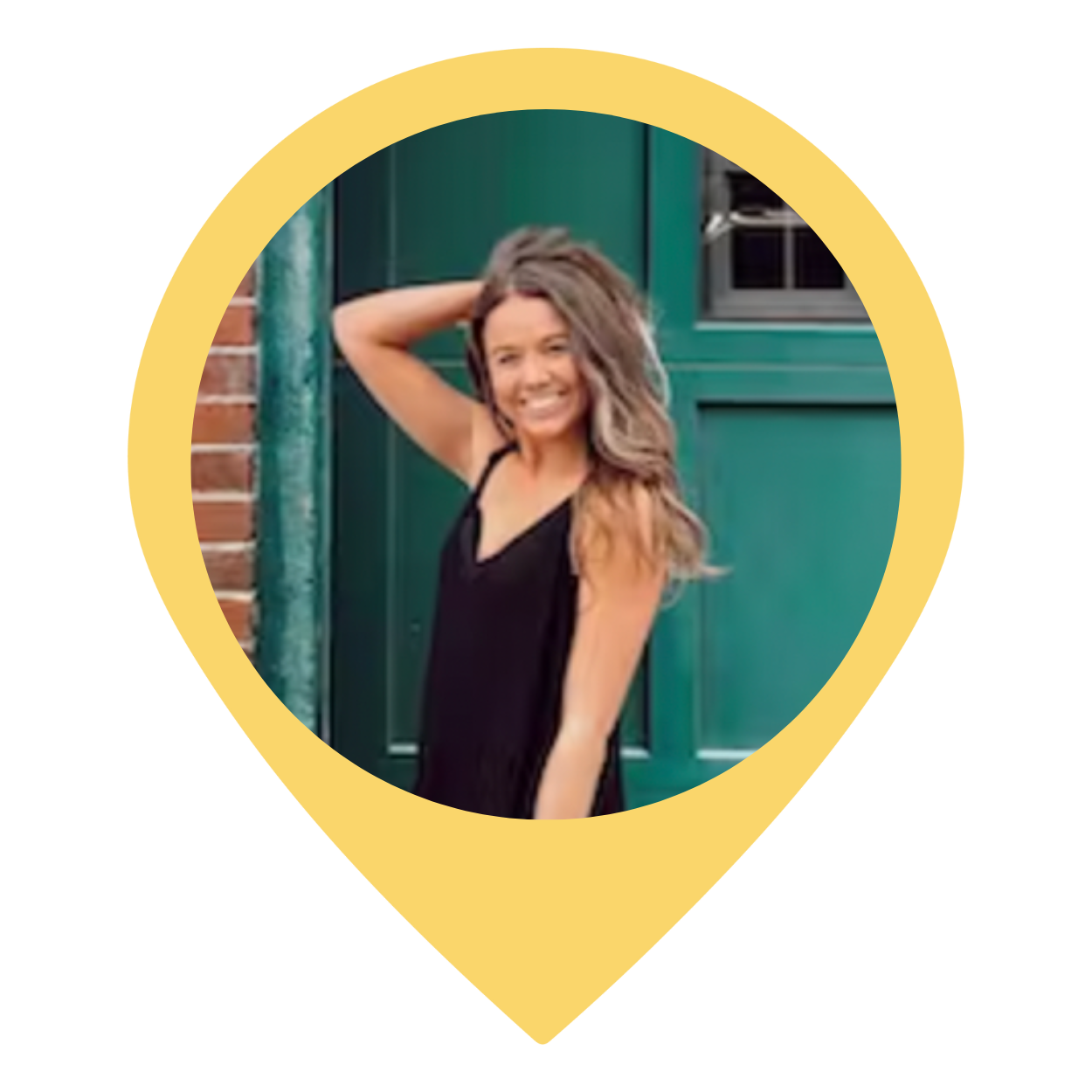 Caitlyn is an Atlanta transplant whose roots in Rocky Top run so...

Rent out your place for the weekend with Graduate Homes

Visit the link below to learn more!

Love Where You Live With Realty Executives Downtown!

We're Knoxville experts ready to help you buy, sell or invest in the Scruffy City! 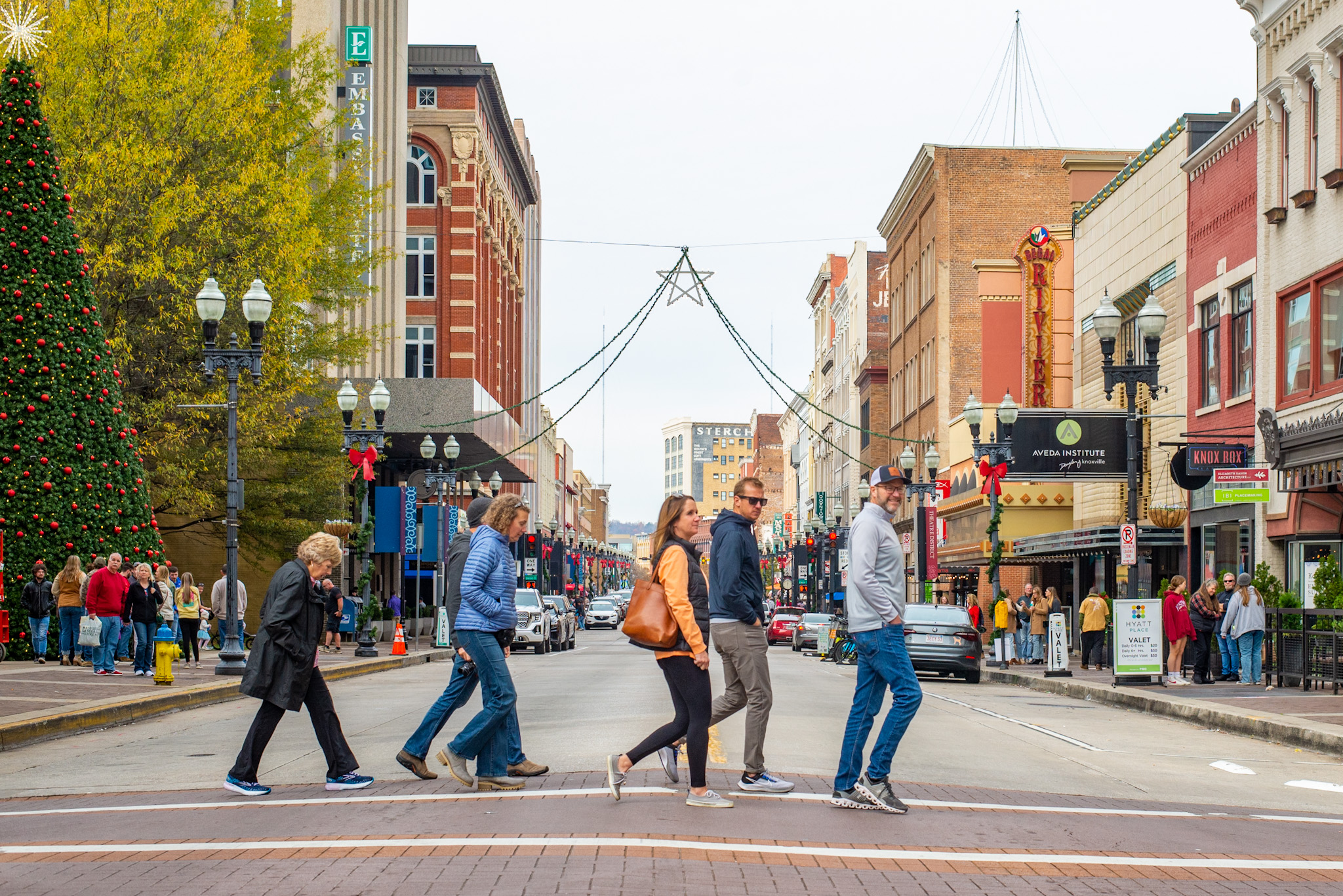 9 Things to Do in Knoxville This Christmas

The holidays are a magical time of year. Calories don’t count. Strangers are welcomed into our chimneys just as long as they leave presents. Drinks are garnished with gingerbread cookies & peppermints instead of orange peels & rosemary. And while we’re... 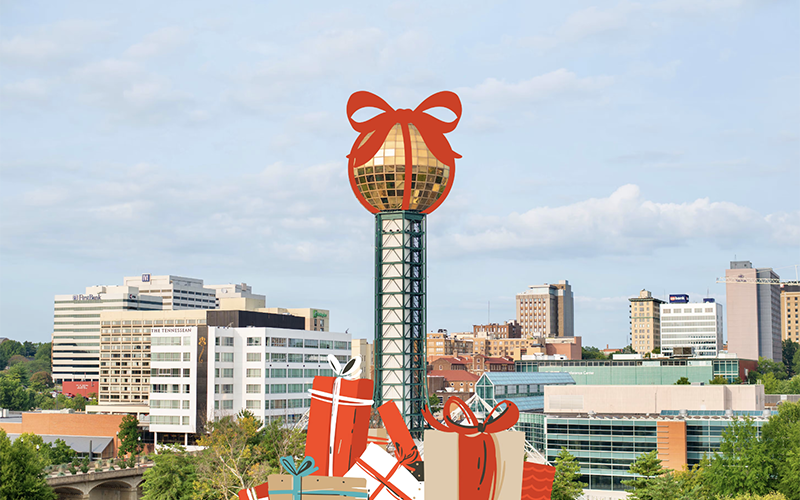 I am absolutely one thousand percent obsessed with all things Christmas. I dive hook, line, and sinker into all the music, traditions, seasonal cocktails and tacky sweaters of the season. So yes, okay, suuuure, FINE, I've been known to go a little overboard on gifts... 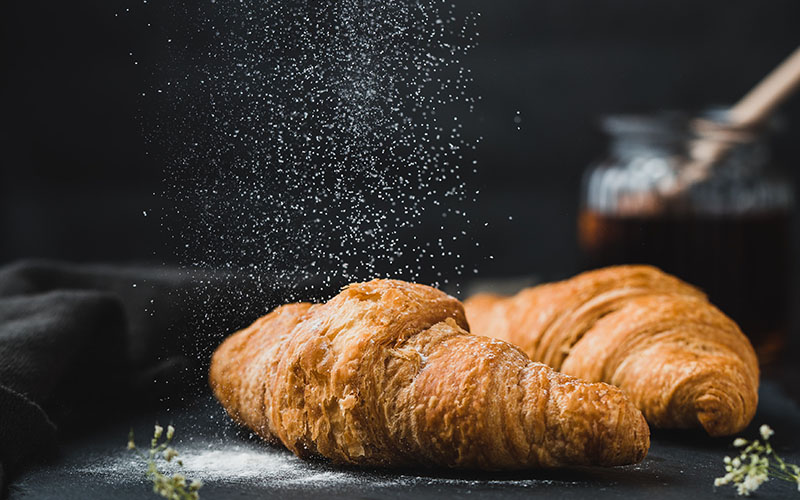 This is for everyone who enjoys the sweeter things in life. (Yeah, we’re lookin’ at you, our buttercream frosting and chocolate-covered anything girlies 😉) There’s no hiding that the Scruffy City has stolen our hearts - but the literal ✨sweetest✨ things about...